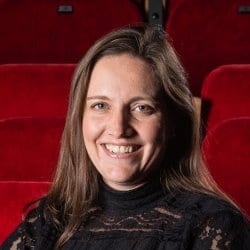 This week, we have the pleasure of welcoming Laura Cull from the University of Surrey!

She will be giving a talk on “Opening the Circle, Toward a Radical Equality: Performance, Philosophy & Animals”

My own recent research has been particularly engaged with the work of contemporary French philosopher, François Laruelle (Professor Emeritus at Paris 10) as a key thinker of the problem of application and the equality of knowledge. Specifically, I’m interested in how Laruelle’s ‘non-standard philosophy’ (or ‘non-philosophy’) provides an important model for Performance Philosophy both in terms of method and ethico-political stance. As one of the most avowedly performative of any philosopher alive today – characterising thought as a performative practice operating ‘alongside’ the Real rather than as a transcendent description of it – Laruelle’s work holds a particular significance for Performance Philosophy. The very call for a ‘performance philosophy’ rather than a philosophy of performance is – in some respects – a direct response to Laruelle’s insistence on ‘an art of thought rather than a thought about art’ (Laruelle 2012a: 5). As Tony Fisher (2015) has argued, Laruelle’s notion of the equality of thought indicates ‘the radical ambition of performance philosophy’, even though ‘the scope of that ambition has perhaps not yet been fully assayed, interrogated or understood’. And indeed, there is much work to do to consider the crucial resources non-philosophy provides to advance the field’s core concern to move “beyond application” as a dominant paradigm for the encounter between performance and philosophy by investigating both the philosophical dimensions of the performing arts, and the performative dimensions of philosophy, thought and knowledge-production.