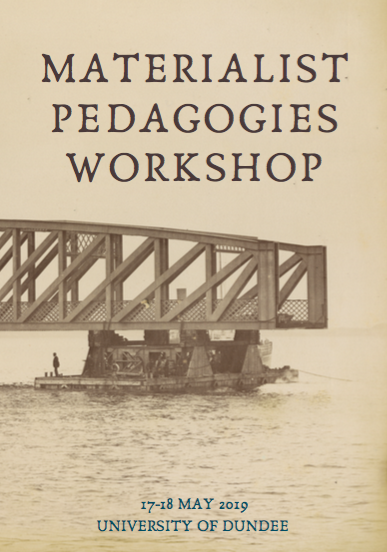 We are pleased to invite you to a workshop on “Materialist Pedagogies”. The core aim of the workshop is to reflect on what can count as a ‘stimulus’ or ‘object of thought’ in the Arts and Humanities today, in the face of a world that, if you believe the hype, seems to be ‘dematerialising’ further by the day….

The workshop will take place this Friday and Saturday (17th and 18th May).

What is it about the object that it, in particular, provokes conversation? How might we begin to constellate, or curate, new and ancient, current and obsolescent, singular and mass-produced objects and the traces of their means of production in such a way that they aid rigorous philosophical and creative thought? Might such a mode of constellation provoke new and productive ways of thinking across not only disciplinary boundaries but also boundaries of work sector, of age or ‘level’ of learning?

In 1929 Theodor Adorno and Walter Benjamin held a series of conversations that they would come to view as ‘unforgettable’ (Adorno) and ‘historical’ (Benjamin).

The conversations – sometimes called the Königstein program – concerned the proper objects and methods for ‘materialist pedagogy’: how can the traces of a culture (its commodities, curios, practices, refuse, and obsolescent technological forms….) be shaped into ‘constellations’ capable of sustaining poetic insight and philosophical instruction?

Adorno and Benjamin both saw this project as crucial for counteracting forms of alienation engendered by advanced capitalism.

But Adorno sharply criticised Benjamin’s development of the project: while acknowledging Benjamin’s early work as the prime inspiration, he nevertheless came to see much of Benjamin’s later work – in and around the famous Arcades Project – as a distraction; Benjamin, Adorno thought, was content to juxtapose traces without interpreting or conceptually ‘mediating’ them, and he held that this was radically insufficient for philosophy and a betrayal of the potential latent in their earlier conversations.

This two-day workshop, provoked by Adorno’s turning-away, aims to pick up some of the threads of these conversations, broken and tangled though they may be, and to weave in some altogether new and different ones. We hope to update reflections on the potentials and pitfalls for ‘materialist pedagogies’ today and aim to do this by pluralising the conversations to include different voices, traces, and new potentials for constellations to form.

Do not hesitate to come along !