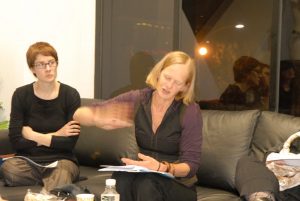 “Of a Universal No Longer Indifferent to Difference: Badiou (and Irigaray) on Woman, Truths and Philosophy”

In a startling inflexion of his core tenet of truths’ trans-positionality, or the neutrality of the universal, Badiou’s 2011 paper ‘Figures of Femininity in the Contemporary World’ proclaims that truth processes can no longer be considered as indifferent to sexual difference, such that it is now necessary to examine the way in which sexuation functions in the domains of political, scientific, artistic and amorous truths.

Not only does this claim run diametrically counter to Badiou’s express refutation in ‘What is Love?’ (1992) of any possibility of truths being sexuated — despite this seemingly following from the assertion of a sexual disjunction entailing that each of the two positions, ‘man’ and ‘woman’, can know nothing of the experience of the other—but it would seem to call into question the very manner in which Badiou has consistently defined sexual difference itself: i.e., as not only strictly determined within the sole field of love, but as strictly existing within this field alone.

There is, however, no indication in Badiou’s recent work that he would concede his inflection on truths’ sexuation to countermand either the privilege accorded to love as that alone capable of furnishing a universal ground on which sexual difference can be thought, or, correlatively, the trenchant distinction between love and desire he was to mobilize in his revision of Jacques Lacan’s formulae of sexuation, from which this privilege follows.

Focussing on this distinction between love and desire, my paper sets Badiou’s contemporary claim that that those who occupy the sexuate position ‘woman’ would entertain a different relationship to the universal than do those who occupy the sexuate position ‘man’ in the context of the French philosophical moment of the second half of the twentieth century—a sequence in which  Badiou’s philosophical peers precisely mobilized the category, or ‘conceptual persona’, of ‘the feminine’  in order to formalize women’s different access, or relation, to ‘the symbolic’.

When compared, in particular, with the philosophy of sexual difference elaborated by Luce Irigaray, Badiou’s intertwining of “woman,” love and the universal—both pre- and post- his inflexion on the sexuation of truths—is confronted to the systematic counter-proposition of alternative conceptual constellations. Might it not, then, be possible that the comparison of Badiou and Irigaray ultimately brings into play something of the order of a demonstration of thought’s sexuation?